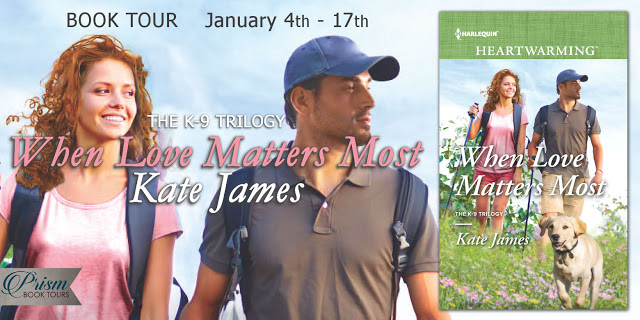 On Tour with Prism Book Tours.

This is an exciting time for Harlequin Heartwarming. Thanks to the loyalty of our readers, for the first time, our January releases, including When Love Matters Most, are available as mass-market paperbacks through Amazon, Barnes and Noble, and Harlequin.com. Also, When Love Matters Most will be available in select Walmart stores in the United States in February! Please check the Harlequin website for the location nearest you. Thank you to all our readers who made these advancements possible for us!

Keeping her safe at all costs

Could their backgrounds be any more different? Rick Vasquez, a K-9 unit sergeant with the San Diego Police Department, fled drug-related violence in Mexico as a boy. Madison Long, who recently became primary veterinarian to the SDPD’s canines, is the privileged daughter of a judge. Rick has dedicated his life to curtailing cross-border drug trafficking and preventing other young boys from being drawn into the dark world of the cartels.

But everything Rick and Madison value, and the growing love between them, is threatened by the dangers of Rick’s job, and the risks he’s determined to take… 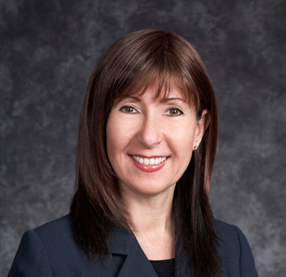 Kate James spent much of her childhood abroad before attending university in Canada. She built a successful business career, but her passion has always been literature. As a result, Kate turned her energy to her love of the written word. Her writing has been recognized with a number of awards, including first place honors for Silver Linings in both the First Coast Romance Writers’ Published Beacon Contest and Ancient City Romance Authors’ Heart of Excellence Readers’ Choice Award. Her November 2014 Harlequin Heartwarming release, A Child’s Christmas, received first-place honors from Southern Magic, the Birmingham Chapter of the Romance Writers of America, for the 2015 Gayle Wilson Award of Excellence, placed second in the Ancient City Romance Authors’ Heart of Excellence Readers’ Choice Award, and was a finalist in RWA’s Desert Rose Chapter’s Golden Quill Award and the Colorado Romance Writers’ Award of Excellence. Finally, her October 2015 release, When the Right One Comes Along, the first book in her K-9 trilogy, has received a Best Book of 2015 award in the contemporary category.

She and her husband, Ken, enjoy traveling and the outdoors with their beloved Labrador Retrievers, Harley and Logan.

Kate would love to hear from you! You can connect with her by e-mail, through her website, her Facebook page, Twitter, or mail at PO Box 446, Schomberg, ON, L0G 1T0, Canada.

Enrique flinched at the burst of gunfire. That slight motion nearly made him lose his balance. He’d been hiding in the corner of his closet for a while, as high up as possible, bracing himself with his back against one wall and his feet against the facing wall. It wasn’t the first time he’d hidden there, trying to avoid discovery, but at twelve he was almost too big to fit. His muscles spasmed from the exertion. He rubbed his thigh, trying to get the blood circulating.

The next round of gunfire sounded as if it came from the hall. Despite the stifling heat in the dark, cramped space, he felt icy perspiration on his brow. The door to his room banged open, accompanied by a rapid exchange in Spanish and the clatter of booted feet rushing in. He bit down on his lower lip to keep from crying out. He heard a swooshing sound, which he guessed was the cover being torn off his bed; under it, he’d stuffed a couple of pillows to resemble a body. He’d prayed they’d take their shot and not bother to check if he was there.

He wasn’t that lucky.

A loud crash—likely a piece of furniture toppling—startled him. Movement halted as the cartel enforcer yelled again to someone outside the room.

Then he heard heavy footsteps approaching. His closet door was yanked open and light flooded in. Looking sideways, he saw the barrel of a machine gun slide in and ruffle the hanging clothes that were concealing him.

The barrel paused a mere six inches from his hip. He knew he was as good as dead if they found him. Petrified, the boy held his breath…

And waking from his nightmare, the man bolted up in bed, drenched in sweat and gasping for air.

Rick Vasquez raked back the damp hair from his forehead with both hands and glanced at the glowing red numerals of his bedside clock. Still shy of five in the morning. He’d barely had three hours’ sleep, but getting any more was out of the question. This was not how he’d hoped to start his day.

He swung his legs over the side of the bed. With his elbows on his knees and his head in his hands, he gave himself a moment to let the vestiges of the nightmare fade and his heartrate level out.

Sniff, his narcotics detection canine partner, scurried to his side and nuzzled him.

Rick straightened and stroked the yellow Labrador retriever’s head. He felt Sniff’s tension subside. He and Sniff had been working together since the day he’d joined the San Diego Police Department’s K-9 Unit six years ago. They were as connected as it was possible for any man and dog to be. The contact steadied him as much as the dog.

Sniff slid down and stretched out across Rick’s bare feet, head nestled between his paws.

Rick exhaled heavily. It had been a while since he’d had the nightmare. He recalled the fourteen-year-old kid he’d caught the night before, crossing the San Ysidro border from Tijuana into San Diego with a kilo of marijuana, and he should’ve expected that the nightmare would revisit him.