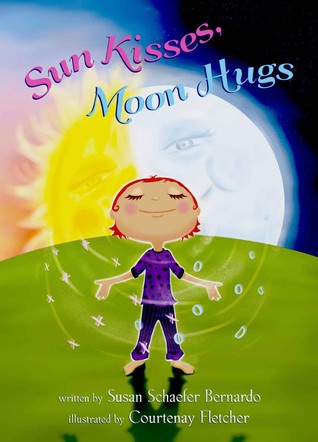 Lyrical writing and delightful illustrations provide perfect bedtime reading for any child. The book is also ideal for supporting children through grief, separation anxiety, divorce, illness or other traumatic situations, by wrapping them in a warm and comforting emotional security blanket and opening a dialogue on the nature of love.

Even when loved ones cannot be with us, we can feel their presence through our deep connections to the natural world.

All that I want to say about the book is already said in the summary. I loved the lyrical writing in this and the illustrations were very colorful and detailed.

The only reason I gave it 3 stars is because of the ARC copy I received. I usually am very thankful for the ARCs I receive and ignore few grammatical errors because it’s an uncorrected copy but sending out a book which is difficult to read is obviously going to alter the reading experience and will affect the review.

This was the case with most of the book.

I don’t know if all the ARCs sent out were like this or it was just my copy’s problem but it was surely irritating enough for me to reduce the rating. If not for the format issue, it would have easily been a 4 or even 4.5.

I was so disappointed by my copy that I couldn’t enjoy the wonderful writing.

That being said it is a beautiful little lyrical tale about how distance doesn’t mean that you don’t love someone and there are ways to remind people of how much we love them even when they are far from us.

For the beautiful writing and the illustrations. ❤ 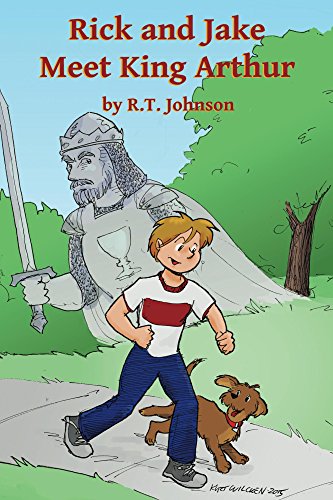 King Arthur and King Ralic battle fiercely for Cornwall. When Merlin the Wizard is captured, King Arthur and his men lose the kingdom to Ralic. The only way to redeem the kingdom and save King Arthur’s lineage from the dark side is through his 70th generation grandson, Rick. Rick must pass five tests of honor and bravery in order for the kingdom to return to its rightful owner. If he fails just one of the tests, King Arthur’s kingdom and lineage are lost forever. Present day Rick is thrown into a world of kings, knights, battles, and life and death. Will he be able to save the kingdom? Will he be able to save his lineage?

This was a fun and easy read. The colorful cover caught my attention at first, then the summary had my interest piqued.

“The only way to redeem the kingdom and save King Arthur’s lineage from the dark side is through his 70th generation grandson, Rick.”

It was kind of funny reading the *sound effects* 😛 😛

This is an educational book hidden under fantasy. This book teaches about kindness, patience, honesty, selflessness, and bravery. 😀

“While King Ralic spoke, King Arthur heard a voice travel through the air. “Tell him evil has prevailed this time. There is pure evil and there is pure good. Pure good cannot be tainted with evil.””

Despite the back story being historic, the scenarios used to test Rick of all these qualities, who is 13 years old, is of the modern day and pretty believable. Not some unrealistic situation but something anyone can face. What we choose is what makes us who we are.

“So, you think you and your line would never falter. Well, I decree that your grandson of 50 generations will be given five tests. Each of those tests will tempt his purity. The lineage will well be weakened by then. If he fails just one of those tests, I will be proven right. It will be that there is no pure good. And, your entire lineage will be doomed to misery and hardship. And, you will lose your Kingdom forever.”

I liked the way it was written. It won’t bore anyone reading and learning about right things in a story is always a plus when that book is intended for middle graders, or kids in general.

“Do not worry, Richard. It is not always the size of a man’s weapon that will determine victory or defeat. Just be on guard.”

Calling Rick with his real name, Richard, can be a hit or miss; a) miss for, he is called Rick in the title so it kind of breaks the link with the whole book where he is called Richard. b) hit for, even when the story is taking place in today’s world, him being called Richard gives a hold to the back story as Rick would sound too modern.

Overall, the premise for the story is interesting and the characters unique. This is a good read for children and a quick easy read for adults. 😀 😀 The illustrations, which are actually sketches are good too. You can use them to color, because why not? 😛

For the easy read with life lessons. 😀 😀

My review of another book by the author: 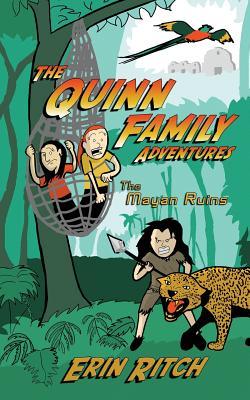 13-year-old Dawn is the daughter of two famous archaeologists, Stanley and Alana Quinn. Their adventures have taken them from one end of the world to the other – and this time, they will travel to the mysterious rainforests of Guatemala. The Quinn family have been sent to find the Mayan Ruins, structures hidden near the sleeping volcanoes of the country’s Northern Region. Aided by local guides and Dawn’s new friend, Juanita, the Quinn family starts their expedition only to be split up in the rainforest’s thick maze. After the girls are saved by a wild girl of the jungle, Dawn learns that her parents are in danger. With the help of her new friends, Dawn must use all her skills to find the Mayan Ruins, escape the jungle, and save her family.

This book is a real quick and good read. It’s an interesting book and is sure to hold children’s attention. This book can be turned into a picture book and the magic can be more defined. 😀

Dawn is the daughter of two famous archeologists as told in the synopsis itself. Dawn and Junaita make a good team as for their knowledge and curiosity. When they find Caine or rather when Caine finds them, the story takes on a more interesting turn from there. 😀

The little mystery to who Caine actually is, is a rather simple and predictable thing for grownups but for kids it can be mind-blowing. They might as well start believing in destiny or the wonderful ways our universe works.

She couldn’t have befriended any better stranger than the child of the people who are sponsored by her late dad’s fortune. How convenient but it sure is more humane than how I made it sound. Dawn’s parents are really nice people and they agree to let Caine stay with them because Caine was so scared of going to the orphanage.

Not even a volcanic eruption could scare her enough for her life to choose orphanage over the wilderness.

This is an easy read and is fast paced, the descriptive parts are as good as the conversational parts. I liked how everything played out.  ❤

For a quick and interesting read. ❤ 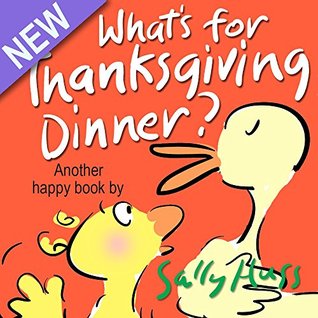 In this book you’ll meet several fine-feathered folks (a duck, a goose, and a turkey) who, after some tricky beginnings, become friends. With amusing rhyming verse to tell the story, the point gets across… that anyone can become a friend. This story is one to tickle the heart of any child, and subtly spark the spirit of gratitude within them. It emphasizes the importance of being thankful.

It is a well written book- beautiful with lots of illustration, easy and rhyming verses. 😀 Everything required to hold a child’s attention. 😉

This is a tale of making friends. Well, this is kind of an awkward way to make friends but this also teaches that something good can come out of every situation.

This book follows the story of three species of fine-feathered folks who plan on making each other their thanksgiving dinner. It takes understanding and kindness on their part to agree to not eat each other and decide on a meal that they all can have without having to kill each other, which is a pumpkin pie.

This book teaches thoughtfulness, togetherness, and problem resolution and most important, it teaches to be thankful. 🙂

For the rhyming verses and pretty pictures! 😀 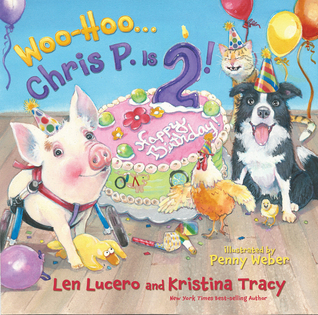 Chris P. Bacon is one remarkable pig. Born with malformed hind legs, he was taken to a veterinarian to be euthanized—but luckily, that vet was Len Lucero, who saw that the little guy was special. Chris P. went home with Dr. Len and within a matter of weeks became an Internet sensation and a media darling, winning thousands of hearts all over the world. Before long, he was a famous author, too!

In Chris P.’s first two books, Chris P. Bacon . . . My Life So Far and How to Roll Like Chris P. Bacon, readers watched him treat his pals to ice cream cones, decorate the barn for a hoedown, bake a batch of Pigs in Mud cookies, and much more. Now he’s back—and it’s his birthday! He is turning two, and, boy, is he excited. He can’t wait for a day full of fun, friends, and family (and grapes and Cheerios, of course!). Follow Chris on his big day, starting with his morning rounds on the farm, where he shares his contagious happiness with all of his friends. Watch him prepare for his big party, and finally join him in the celebration and see what his furry and human friends have to say about Chris’s first two years as everyone’s favorite Pig on Wheels!

When you combine real life stories of animals with beautiful illustrations, kids love it. This is the story of a little pig, Chris P. This piglet is born with malformed hind legs and is taken to a veterinarian to be euthanized but the vet Len Lucero takes him home.

He builds a cart for him, like a wheelchair from his son’s toys. It is Chris P.’s 2nd birthday and he is very excited, so are all the animals and humans invited to his party. The story covers the day as he waits for his party and everyone talks about how his little lovely, courageous heart has affected them.

The book has lots of colorful illustrations that makes the reading experience more fun. The pictures of real Chris P. is included in the end of the book. After looking at the pictures did I realize that Chris P. was real. Apparently he is a YouTube sensation and also an author! 😉 😀

For the cute little hero! 😉 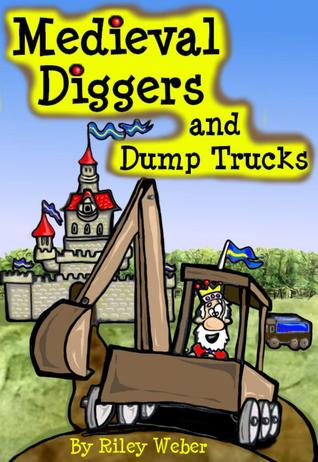 This is a book about a King who wants to build a moat around his castle. He wants it so much that he invents or builds a excavator/ digger and a dump truck out of wood.

Now, kids aren’t going to think about why any metal wasn’t used. It might be the fact that metals weren’t that known in the time. This story just tells us about a King who wanted a moat and built big machines and equipments to build a moat.

The people of the kingdom are very proud of what their King has achieved and the King is happy with the moat. All well and happy in the kingdom.

How the wooden machines work is not told but then again it’s a children’s book. Good for a fun read, not much to learn though.

For a quick read.