There are tons and tons of book series I haven’t read… unfortunately. I try to read them all but the popular series are usually the ones that get ignored by me. Most of them have been made into movies and TV series.

Everyone and their mothers are shook when I say I haven’t read Harry Potter. Now the reason is the popularity and intense fandom of this series. The fandom is so vast and so firm believers in the Harry Potter world that it intimidates me to kind of form my own opinions. I kind of have read a lot of fan theories and memes… yes, the memes, so I am already biased towards some of the characters and know most of the stuff that happens. That might also be because of the fact that I’ve already watched most of the movies.

This book series has always been on the back of my mind, like I want to read it but I am not actively seeking to read it. Like, if I have nothing else I might pick it up. I am going to need external intervention to actually read this series.

This one is because of the fact that I saw kids go into Narnia through a cupboard on TV as a kid. I never watched the whole movie but for some reason, it has just stayed with me and for the purpose of closure I want to read and watch the series.

I bet it’s because of the popularity of the author that’s drawing me towards it.

Most of the people love to hate Twilight. It’s one of the series that everyone read and enjoyed when they were a kid but as they grew up they became embarrassed of the fact that they enjoyed it, so now they go out of their ways to tell anyone who would listen, how much they hate this series. I recently found out through a classmate, who is a fan of Twilight, the movies, not the books, she doesn’t read, that twilight fans or fandom is called “Twihards.” I googled it just before writing this blog post and shooting a YouTube video on this topic, the dedicated names to groups of people is really very interesting.

Now, I will just club the sixth and seventh series on my list because they are by the same author.

Have you seen how much every other Booktuber, Book Blogger, and Bookstagrammer loves Cassandra Clare and her writing style. I think people love The Mortal Instruments a bit more than the Infernal Devices. I have read 2 chapters from the first book of The Mortal Instruments i.e. City of Bones and I really liked it so I guess I might pick it up soon enough.

I feel this is another Harry Potter situation to me, not that strong but somewhere along the lines. It starts off as a children’s book and then is consumed by all adults and honestly I do not lean much towards Mythology, so there’s that.

Now, this is a retelling of fairy tales and I am interested to read this because… have you seen the covers? They are gorgeous and so interesting. This series to me seems like it rose to fame pretty quick but the hype died down before the whole chronicles was even out. One day it was in every Booktuber’s video and the next day nobody was talking about it. But I really do want to read this.

This series pulls off another Cassandra Clare for me. The same reasons honestly, everyone loves Sarah J. Mass and the Throne of Glass series, so I am tempted to find out what it’s all about.

Here are the 10 popular series that I haven’t read but want to. If you are planning to read or reread any of the series, do let me know so that we can buddy read. You can read me on Twitter, Facebook and Instagram or comment on my blog post or on my YouTube video.

Click on the image to watch the video. (Isn’t the thumbnail dramatic? 😛  I laughed when I created it. 😛 )

This has been one of the most difficult projects for me because I was way out of my comfort zone. I like making proper beginnings but I do not like sharing things that are private. It has been a rocky few years and I haven’t shared much with anyone so making this video was definitely a challenge. I didn’t know what to say and how much to say… how can you really sum up years of grievances, issues, bouts of depression, anxiety, self hatred, low self confidence and lots of hurt, into a 10 to 20 minutes video?

I still tried, I wrote down the gist because even after deciding to open up, I couldn’t actually share my personal life so overview it was going to be.

I shot the video over a month ago but kept cutting out bits and pieces from it because it seemed to me that I was giving a lot away. I almost cut off half of it, I decided to add clips and leave the editing to that. I wanted it to be as raw as I could keep it, as real and as close to my heart as I could bear to, as much as I wanted to make a proper start and update you guys, making myself uncomfortable and anxious over a video wasn’t worth it.

I decided to upload the video and put it on private. That has stopped me from uploading my other videos. Something clicked in my mind yesterday that made me go, “Why am I not uploading it? I should do it for me and people who support me.”

Then something happened in the late evening that just steeled my resolve to post it. So right now I am uploading it before I lose my nerve. I am going to see my friend off at the airport, (he is going to the United States of America for further studies) right now I am at his place with my other friends on their way here and when this video goes live I will be among people who already know about the video. So, not much anxiousness to deal with, smart right? 😛 😛

Even though I am still a bit uncomfortable with putting the video up because people who know me are sure to ask a ton of questions, that I won’t be answering anyway. I can be a bit more open here because only people who understand me, mostly all strangers, read my blog.

I haven’t posted in a hot minute, make that over an year. I have missed my blog and you guys so much. 😥

As soon as I began typing a very enthusiastic energy took me over, I am smiling like an idiot while typing this. 😀

I made a channel intro for my Booktube channel (YouTube for Books) and just wanted to share with you guys before I put up a proper update tomorrow. 😉 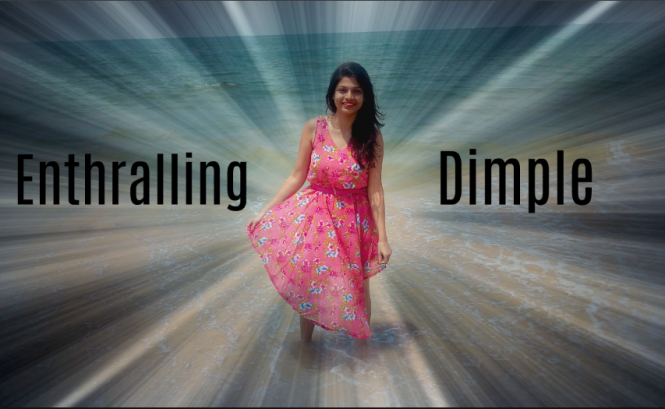 I have a very exciting news for you guys! the title already tells you what it is but anyways, I created my BOOKTUBE CHANNEL! FINALLY! ❤ 😀 ❤

❤ Link to my Booktube Introduction video! ❤

❤ Link to my Channel- Enthralling Dimple ❤

Show support, guys! It would mean a lot to me! ❤ Do tell me what you think. 🙂