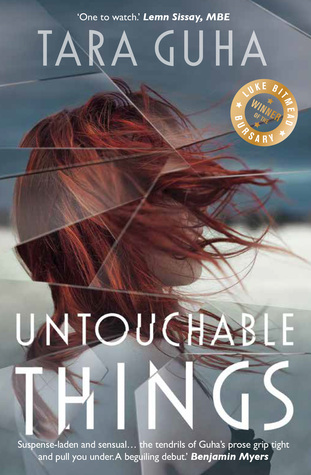 *ARC received from NetGalley in exchange for an honest review*

For the third time this week he is watching her scream. Watching, not listening.

Rebecca Laurence is centre stage and shining in her role as Ophelia. She pivots, rotating like a ballerina impaled in a musical box, red hair cascading down her back. Amidst the thundering applause, one man is watching.

Rebecca meets the charismatic Seth Gardner, and as attraction grows between them, he invites her to join his Friday Folly, a group of artistic friends. But as Rebecca is drawn into the web of tangled relationships all is not as it appears. The scene is set for the night that will rip the group apart.

Consumed by loss and surrounded by secrets, Rebecca must escape the grip of the Folly to have any chance of saving herself. Meanwhile, one man continues to watch.

This book is as suspense-laden as it could get. Seth Gardner is a real charmer and the most mysterious person. He knows all the dark stories of every one in the group and nobody knows a thing about him.

The beginning is what is difficult, the vocabulary isn’t for average readers. But once you are patient and get on with the story, it will give you one of the best psychological dramas you might have ever read. 😉 This surely isn’t an easy read, you need concentration for it but you don’t have to work hard to concentrate, the story pulls you right in. 🙂

It gave me a feel of reading multiple books at a time. All the 8 characters: Seth, Rebecca, Jose, Michael, Jake, Charles, Catherine, Anna; had their back stories plus more side characters from each one’s story; this really makes you feel like you picked up a different book every time the character in focus changes. The main focus is on Rebecca but you know as much about everyone else as you know about her.

This is Seth’s line which I liked very much because I kind of believe in it. What’s the point to running when you can be brave, deal with every situation and have fun while you are at it.

This paragraph made me think about how sometimes strangers are more reliable than the people we know. How it is easy to share our darkest secrets with an unknown person yet find solace in their understanding.

These are Catherine’s words which I very well relate to. 😛 Every character in this book, has had a hard time and has pretty interesting and intelligent things to say.

Michael says some really intense things with his bluntness and rudeness but including that would be revealing what the book has in store for you, better read it to understand it. 😉 It took me a whole day to read this book and it was worth it. I was tore in between giving it a 3.5 or 4 stars because to get a hold of what was going on, I had to be dedicated for the first 15% and that was what made me think about the rating but then I shunned the technical elements and went with my feeling for it. 😀

It is an intense story dealing with a lot of dark emotions, demons of the past and life struggles yet it tells you how little things bring happiness in life. Their life might me a mess but their weekly meetings somehow keep them on their toes although that’s not as simple as it might seem. There’s a huge mystery lurking in the corners for the group to find.

The group they are all a part of, “Friday Folly”, is the way they all meet and the group somehow shapes everyone’s lives. This book deals with the emotions of people, how, if not controlled, emotions can ruin relations as well as it can build it. One such group meeting, with Childhood as theme, really touched my heart. I got emotional for all the experiences they had as a child, good or bad, it was really moving.

The writing style is a smooth switch between present interrogations, play, and the past re- tellings. The interrogations work as a summary before each part of the past re- telling and the play gives it a light element. There are a lot of references to Hamlet, dark emotions depicted in poems, and even Greek mythology which helps in the guess work for solving the mystery.

This is an intelligent book, to summarize it but the beginning and the ending are a little hard to get. There are too many ends left loose in this story, I think it will easily provide something for a sequel. There are a lot of personal mysteries yet to be revealed and the mystery that is solved is also a guesswork of the characters, so I hope there is a sequel to it. To tie-off the loose ends and smooth out the edges and obviously, to provide some mental stimulation.

It is for the days when you want to read something heavy, challenge your mind and get an intelligent story. 😉 Definitely not for passing time. 😛